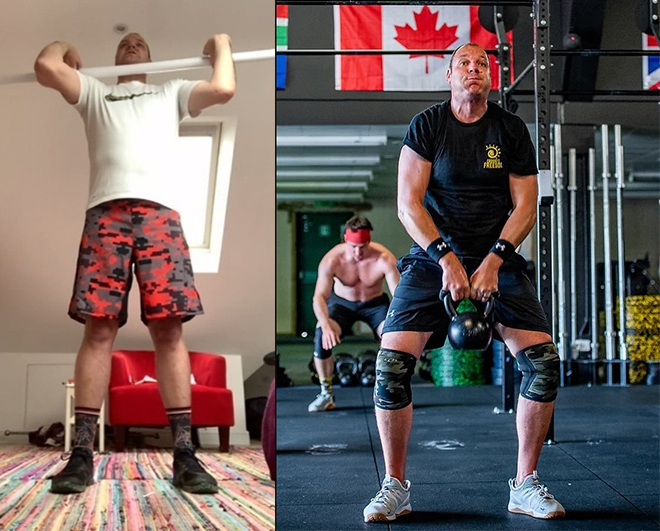 25 years ago, when I was 22, I was out walking in the Peak District.  I slipped on a wet stone and fell directly onto my coccyx. At the time I thought I’d just hurt my glutes and hamstrings and other than minor discomfort I felt ok. Turned out I had in fact completely herniated two discs in my spine.

After a few years going round the NHS system and countless scans I was advised to wait as long as I could before having surgery.  The fusion they wanted to do, they explained, would negatively affect me.  Given my age, they felt I should carry on as best I could, and hope medicine progressed enough to offer a better solution.

Fast forward 15 years and other than a tendency to occasionally pull my back, I was as mobile and fit as anyone. I’d taken up Muay Thai boxing and was running daily.  I competed in my first half marathon and my first fight. I felt alive, a million bucks. I was strong and confident. Sadly, the by-product of my new Muay Thai boxing mobility was that the herniated part of my disc, dried and dead after all those years, simply broke off and started causing me some serious issues.

Ten years ago, those issues came to a head.  I was walking one day when I noticed I was dragging my leg, which was completely numb. I had an emergency Microdiscectomy after I lost all movement and feeling in my left leg from the knee down. Whilst they were able to remove the part that broke off and restore nerve conductivity, there was nerve damage severe enough that it’s not recovered. My left ankle and knee have nerve damage to the muscles.  They are very unstable.  My left foot has areas of numbness to this day.  I’ve always struggled to build up any strength in my left leg at all.

I’ve basically spent 25 years with an adapted posture, walking gait, and stance while my body does whatever it needs to do to stabilise me.

Which brings me to my CrossFit journey…

I’ve been a member of two other
CrossFit gyms (in CrossFit we call them boxes!) since 2017.

In both instances, within six weeks of starting I was injured and couldn’t continue.

At the time, I was in an environment where I felt ashamed for having the light bar and wooden plates.   I was doing all the movements incorrectly.  It didn’t take long for the weight of that light bar and my ignorance of how to move correctly to push that one little muscle that was stabilising and supporting me to breaking point… and then I would be injured.  I’m not a quitter.   I’d heal and come back and get hurt again.

In October 2019, I was out with a good friend, Jay, celebrating my birthday.  We were abiding by the first rule of CrossFit (always talk about CrossFit!) when we spotted Tim Partello and Cara Partello (CrossFit Freesol Founders), so they joined us.

A great evening of banter and laughs were had, and over the next year, and COVID(!), I heard stories about CrossFit Freesol, I also noticed how much Freesol were doing for my mate and how he was improving so much with their coaching.

Come March 2021, I’d put on a lot of weight, and not really moved from my home study for well over a year. I was talking to my friend Jay about getting back into CrossFit and seeing how much he still raved about CrossFit Freesol, thinking maybe they might be a different experience. Jay gave them my number, and they called me.  We spoke for about an hour about my fears, my past experiences and ultimately my aspirations.

At this point the CrossFit Freesol was still in the early stages, but Tim and Cara genuinely wanted to help me, and I felt the pull to the ‘tribe’. I signed up then and there and was doing my on boarding with Tim within a few days. Ten days later, and with my certificate in hand I was given weights, KBs, an abmat and bands and that was me on online WODs with the others.

The biggest take out for me during my 1-2-1s with my CrossFit Freesol coach is how little the previous CrossFit inductions taught me.

So, while I’ve known about CrossFit a long time, it wasn’t until March 2021 that I’ve actual “done” CrossFit properly.

With the CrossFit Freesol coach’s approach, I learned not only the rudiments of each movement but the why of them.  I also built muscle memory and a “feeling” for how the movements should feel. Initially, using the PVC pipe and just doing the movements correctly was the perfect workout for me. It was enough that those protector muscles relaxed and allowed me to be more mobile, but not so much that I became injured.

Now, almost a year later, my wife Suzy and I are regulars at CrossFit Freesol.  I’m stronger, more mobile, and more confident in my body and my own strength than I can remember being.  No more PVC pipe for me (except when I’m warming up or practicing technique).  I’ve gone from squatting with a plastic pipe to an 80 kg barbell (that was within two months at Freesol by the way).  I still hate burpees and you’ll never see me at a 6am class.  But CrossFit and the coaches at CrossFit Freesol have changed my life.

Are you ready to change your life?

Whether you want to sharpen up and live a healthier life, you’re pretty fit but want to improve your game, or you dream of competing at the CrossFit Games, our team and our tribe will enable you to achieve your goals.

We promise you that we are different from every other fitness ‘experience’ in Newbury, and we challenge you to try us out.

Decide for yourself. Let us know what you think. You won’t be disappointed.

Take the next step